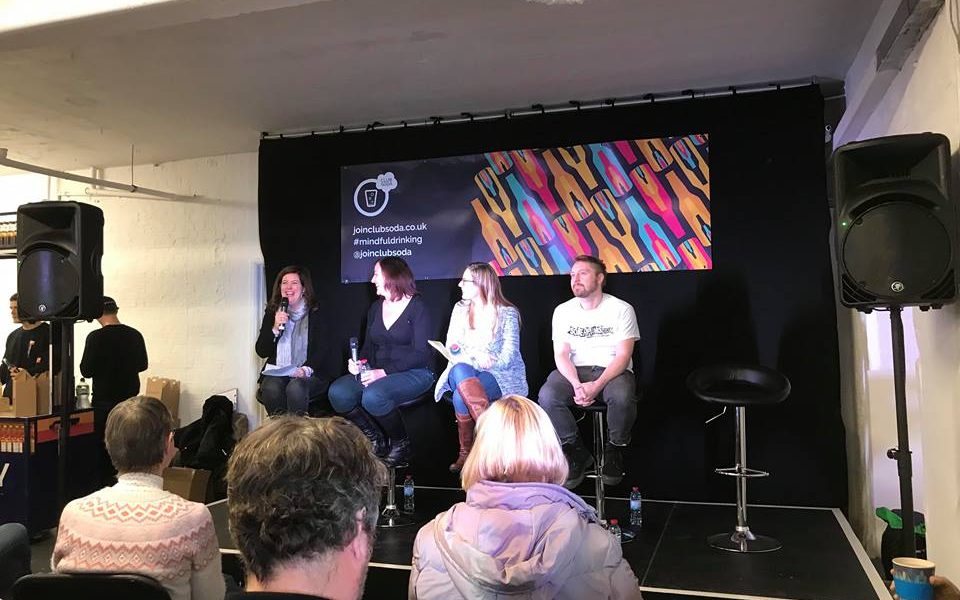 I had always been tempted to attend a Club Soda event and when I saw they were hosting a Mindful Drinking Festival at The Truman Brewery in Brick Lane, London last weekend I thought it was time to go along and check it out for myself.

I was also keen to meet up with Clare Pooley author of The Sober Diaries who I had been speaking to about the possibility of her doing something at a future Be Sober event we are planning.

So I jumped on the train to London and navigated my way to Brick Lane, the venue was in a rather impressive and very trendy location which gave a feel of ‘it’s cool to be sober’ even before I went inside.

Once inside the event it felt a bit like a Disneyland for sober-folks, there were around 40 stands all offering free samples of unique and exciting alcohol-free and botanical drinks, I couldn’t get enough and wanted to taste everything on offer.

I still have a weird reluctance to drink anything that is 0.5% alcohol and avoided these, even though they are technically alcohol-free, so I stuck to the 0.0% offerings – there were plenty.

Everything was really well organised, there were plenty of Club Soda staff on-hand to answer questions and I was made to feel really welcomed by everyone there. It was also great that quite a few people I spoke to had heard of Be Sober and follow us on social media. My favourite drinks were Borrago and Sea Arch, both botanical drinks which can be mixed with tonic water for a grown up alcohol-free drink, I would highly recommend both and picked up a couple of bottles to take home with me. Borrago Drinks and Sea Arch – check them out!

There were plenty of other options available to suit every taste and next time I will take a bigger bag to bring home all my purchases!

I also watched a fantastic alcohol-free cocktail making session and had a taste of the final product which was great. I was surprised at how many people were at the event, there was me thinking there were only a small number of people interested in sobriety, this really is a sober-movement!

The highlight of the event for me was the panel of speakers, there were a number of talks on during the event with some big names from the sober-world. The one I watched was about journalling, blogging and sharing sober-stories on social media. The panel featured Clare Pooley, Dawn from Sober Fish, Mandy from Love Sober and Jonathan from Sober Punks and I was captivated listening to them for the whole hour.

The mindful drinking festival also featured workshops and smaller sessions as well as interviews and panel discussions, all spread over the weekend. I recommend booking a seat for these sessions in advance.

Overall, the festival got a solid 10 out of 10 from me, I would strongly recommend making the effort to attend the next one, I left with a real sense of community and amazed at how many other people were on the sober-journey, I was also surprised at how many alcohol-free products I didn’t know about.

Thank you to Club Soda for organising such a fantastic event, hopefully next time I will be on the panel of speakers 😉